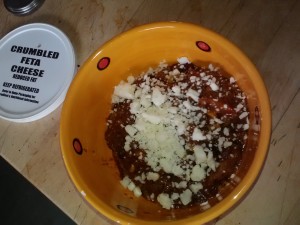 Let me start again. Stone Chili was made ala Stone Soup, in the style of Stone Soup that is.  Never heard of Stone Soup?  Just two weeks ago I would have found that surprising but lately I have been telling this tale of community dining and contribution to many new listeners.  It goes like this.

Three soldiers of fortune found themselves in a new town without any money or food so they agreed it was the perfect opportunity to make Stone Soup.  With all of the villagers superstitiously watching, the three set about walking the town square kicking stones until one curious villager asked what they were doing. “We’re making stone soup but it takes just the right stone to give it flavor.” Another of the three piped up, ” I’ve found it.” The other two with the villager in tow agreed it looked like the perfect stone.  “If only we had a pot.” one said.  ” I have a pot.” the intrigued villager said and dashed off and returned with a fine deep kettle.

The, now, group of 4 collected firewood, started a fire, washed the stone thoroughly, filled the kettle with water and gently added the stone. By this time other villagers began to gather. “If only I had a spoon?” one soldier said.  “I have a spoon,” another villager said, and a spoon was produced.  The first soldier set to stirring the pot and as the steam rose he dipped the spoon and tasted the broth.  “How is it?” the others asked.  “A little thin still, I think it needs an onion.”  “I have an onion!” yet another interested villager piped up.  And so it went as onions and carrots and vegetables and chickens and meats and spices were brought forth.  With the entire village standing around the soldier with the spoon finally announced, “It’s ready!”  At which point the entire village shared in a pot of Stone Soup.

This is one of my favorite community meal stories.  One where equal contribution brings forth a great tasting meal.  Recently my brother was organizing a family camping trip and he and I were brainstorming ideas for a meal.  Stone chili, I said. And while we bandied about the potential pitfalls of having truly random contributions we settled in on a split approach.  Some of our siblings would bring – whatever – to add to the pot, while one of my sisters was tasked with bringing corn bread.  Personally I have never had a stone soup or potluck party fail because every guest brought a stone or a salad.  It always works out.

It worked out this time as  well.  I brought meat and spices.  A can of corn was offered as was a tin of beans and even some garden grown tomatoes.  My brother roasted fresh chilis and the pot of stone chili grew.  Honestly it turned out to be one of my more successful melanges. I had leftovers at home for a week and could never seem to limit myself to just one bowl.  So Stuff-Your-Face-Stone-Chili was born.

For those of you who read this far I give you the secret sword thrust!

I first saute’d the meat with onions and a fistful of chili powders that I have collected over the years.  The initial tastings proved a bitter batch. Orange juice was added and reduced. My oh my, what a difference it made.  Fresh roasted chilis, tomatoes, corn, beans and whatever was laying around filled the pot.  It stewed for a good hour before we ladled it over my sister’s cornbread and topped it with a dollop of sour cream.  Yum in a cup I promise you.  So remember, as you are balancing out the bitter flavors in whatever dish you are cooking consider the many sources of sweetness that are available to you: maple syrup, honey, plain old sugar and of course, orange juice. It was so good I forgot to take a picture until this very last bowl.  I was out of sour cream so I added a little feta I had laying around. What?! Every good cook has a little feta laying around.  The flavors blended perfectly.  I call it my Greek version of Stone Chili.

Good luck and be sure to write to me about your Stone Soup experiences.  Until then,

p.s. This stuff would definitely feed your munchies . . . just sayin!