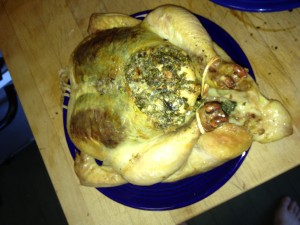 In this corner, weighing in at a plump 3 1/2 pounds the current heavy weight roasted chicken champion of the world: Madeline Kamman’s Herbed Butter under-the-skin.
A traditional French technique for chicken that can be used for roasting or Sous Vide cooking. This mighty dish has charmed royalty the world over and stands as the pinnacle of simple poultry preparation. 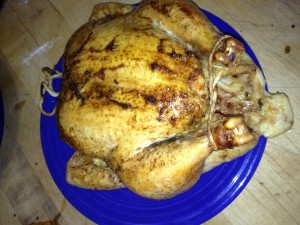 And in this corner, weighing in at a firm 3.25 pounds, the Contender, Jessica Cogan’s made-by-mom-at home Mahogany Chicken. The pride of the borough, this friendly approach to adding flavor should not be underestimated; stylish, smart and sassy. Who will be the winner is anyone’s guess.  Kamman’s herbed champion has the breasts to put up a great fight.  But Cogan’s Mahogany contender has got the legs to run away with it all.   Marquis of Queensbury rules apply! 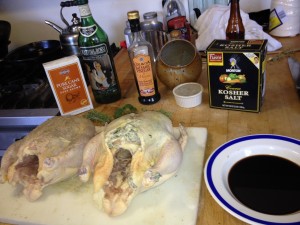 In the left corner prepped with just a rub of salt and pepper on the skin: The Mahogany Contender.  In the right corner with an herbed butter rubbed under the skin directly on the breast: The Herbed Champion.

The judges score this round evenly. An equal effort from both birds.

The Contender’s basting marinade is 1 part brown sugar, 1 part balsamic vinegar and 1 part dry vermouth applied after the first 45 minutes of cooking then every 15 mins after that until done.The Champion’s herbed butter is 1/4 cup butter, salt, pepper, garlic. rosemary, thyme and basil. 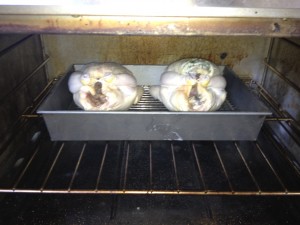 In the left side of the oven The Contender holds its own against The Champion.  But don’t count out the slippery moves that Herbed Butter can bring to this fight.  The heat is up for both of them and so far neither is backing down from a basting.

Uh Oh! The Champ is showing signs of melting down while the challenger, showing great poise under all this heat, is just crackling away.  The crowd is silent watching these to birds go head to head in headless combat. Never before have we seen such fancy footless footwork.  Ding!  Saved by the bell. 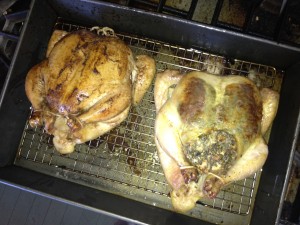 The final round and The Contender is putting on a show.  Evenly browned after multiple bastings She’s showing no sign of legging off.  The Champ, a little unevenly used from the butter directly under the skin, is still in the fight. Her delicious herbs giving off the airs of a true champion, one who never quits.

The Fight is Over!! 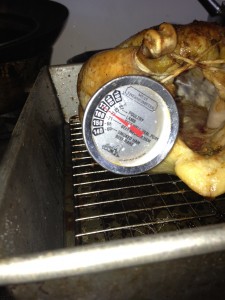 Amazing!! Never before is the history of Winner, Winner Chicken Dinner have we seen anything like this before.  Who would have guessed it?  Folks, just who could have foreseen the outcome of today’s match up? Not you, not me, nobody could have predicted this!!  After 1 hour and 25 mins in a 350°F oven the judges score the final numbers equally at 170°F. I still can’t believe it. My hats off to both of these plucky fighters.  I guess we’ll just have to wait until after they cool down before we can get a taste of what happened here today.  My oh my! I’ve never seen anything like it before.  No sir- ee.

Madeline Kamman’s age old classic recipe proved feisty but it’s moves were a bit outdated and predictable.  The Contender, Jessica Cogan’s Mahogany Chicken takes the title with it’s even browning and moist marinaded flavor.  Our hat’s off to both the fighters in this matchup.  What?  What’s that I hear?  A rematch??  That’s right folks you heard it here first.  These two birds aren’t done flapping their wings yet.  Until next time . . .